Did you know that brushing and flossing remove bacteria from teeth and gums but as much as 50% of the bacteria in the mouth live on the surface of your tongue?

And it’s these bacteria in particular that can be one cause of bad breath.

The best and most effective way of neutralising bacteria that live on the tongue is to scrape them off.  Your kids may think it sounds yucky but if they do it they’ll not only have a cleaner tongue, but their taste buds will be alive and food will taste so much better naturally!  So perhaps there’ll be less demand for sugary or salty foods.

So how do you get your kids started with tongue cleaning?

There are a couple of options so get them to give each a go and see which one they prefer. 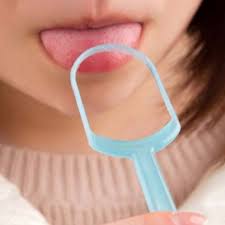 The most common way is brushing with their toothbrush however this isn’t the most effective.  After all, toothbrushes were designed to clean teeth, not tongues!  It won’t remove as much as scraping but it’s a good start.

Using a spoon is a good way to introduce your child to the idea of tongue scraping and how it feels. It’s more effective in removing the coating of bacteria from the tongue than brushing. If your child prefers scraping to brushing then the next step would be to buy a specially designed tongue scraper. You can find them in selected health food stores , pharmacies and online.

After they’ve finished brushing their teeth, get your child to brush or ‘paint’ his or her tongue gently from back to front and along the sides (no need to do underneath). Get them to brush as far back as possible without gagging.

Do this every time you clean your teeth and you’ll soon notice the changes in your mouth!